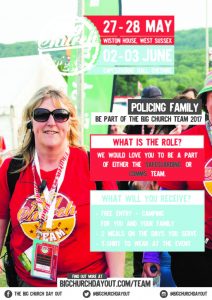 Alice has been a friend of the LCPF for many years and has previously played the piano at our annual celebrations.

She has been a Volunteer in Surrey Police for 22 years. Eight years ago she joined SP as a Support Worker for the CPA; since when she has written the Prayer Letter every week, at Surrey HQ’s. She supports the Christians and many others in the Force.

Three years ago she was asked to be the Chaplain at Woking Police Station. Caring for the Major Crime Team for Surrey and Sussex and the Complex Abuse Unit; amongst other Departments.

She is also a Trustee in the Woking Street Angel Team

Thanks to a new partnership between the LCPF, Surrey CPA and the Sussex Police Christian Fellowship the coverage of the Prayer Letter is now being shared between the force areas that the respective groups cover.